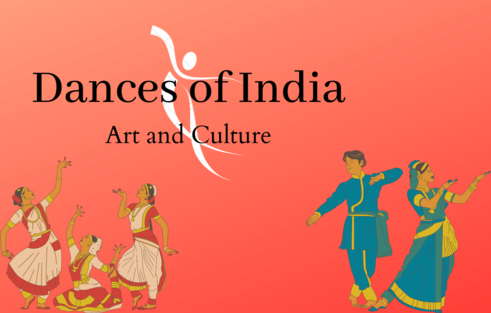 Dances of India | Art and Culture

India has an enchanting history and tradition of over 2000 years. Every section of the country practices some or the other form of beautiful dance forms representing their community.

The two major divisions of the forms are:

The main criteria for the classification are the style’s adherence to the guidelines laid down in Natyashastra. Natyashastra, explains the Indian art of acting. Folk dances of India vary according to the region irrespective of the grammar, primarily fitting into the regional scheme of festivals.

Bharatnatyam originated in Tamil Nadu. It was earlier known as Daasiyattam. This dance form has been handed down through the centuries by dance teachers called nattuwanars. The performers in the temples were known as devadasis. In the sacred environment of the temple, these families developed and propagated their heritage.

Kathakali is a highly stylized classical dance drama from the 17th century. This classical dance form is particularly noticed for the dancer’s elaborate costumes, eye-catching look, towering headgear, billowing skirts, and long silver nails. Some recent developments in the dance form over the years include the improved look, refined gestures, and added themes besides more ornate singing and precise drumming. It is performed regularly at festivals in temples, at cultural shows for connoisseurs, and also at international events, occasionally in fusion dance experiments.

Kathak means ‘to tell a story’. It is a north Indian dance form, inextricably bound with classical Hindustani music, and the rhythmic agility of the feet is accompanied by the table or pakhawaj. Traditionally, the stories were of Radha and Krishna, in the Natwari style. The Mughal invasion of India left a serious impact on the dance. It was started to be taken as an entertainment source rather than religious when taken into the Muslim courts.

Kuchipudi originated in Andhra Pradesh. It derived its name from the village Kuchipudi (Kuchelapuram) in Andhra Pradesh. The dance drama that still exists today and can most closely be associated with the Sanskrit theatrical tradition is Kuchipudi which is also known as Bhagavata Mela Natakam. The actors sing and dance, and the style is a blend of folk and classical.

The theme of Mohiniyattam is love and devotion to God. The hero is often Vishnu or Krishna. The spectators can feel His invisible presence when the heroine or her maid details dreams and ambitions through circular movements, delicate footsteps, and subtle expressions. Through slow and medium tempos, the dancer is able to find adequate space for improvisations and suggestive emotions.

The dancers maintain realistic make-up and adorn a simple costume, in comparison to costumes of other dances such as Kathakali. The dancer is dressed in a beautiful white gold border Kasavu saree of Kerala, with the distinctive white Jasmin flowers around a French bun at the side of the head.

Manipuri is one of the six classical dance styles in India. It is indigenous to the state of Manipur. The roots of the dance are the ancient Sanskrit text Natya Shastra. The love story of Radha and Krishna are commonly acted out in dance-drama performances.

The Manipuri dance was popularised throughout India in 1917. Rabindranath Tagore saw demonstrations of the art and brought back dance teachers to serve in his Vishwa-Bharati University at Santiniketan.

The Manipuri dance is a team performance, with its own unique costumes, aesthetics, conventions, and repertoire. It is accompanied by devotional music created with many instruments, with the beat set by cymbals and a double-headed drum of sankirtan.

Odissi is the dance form from Odisha and is supposed to be the oldest surviving classical dance form from India. Odissi is based on the popular devotion to Lord Krishna and the verses of the Sanskrit play Geet Govinda are used to depicting the love and devotion to God. The Odissi dancers use their head, bust, and torso in soft flowing movements to express specific moods and emotions.

The form is curvaceous, concentrating on the tribhang or the division of the body into three parts, head, bust, and torso. The mudras and expressions are similar to those of Bharatnatyam. Odissi performances are replete with lores of the eighth incarnation of Vishnu, Lord Krishna. It is a soft, lyrical classical dance that depicts the ambiance of Odisha and the philosophy of its most popular deity, Lord Jagannath, whose temple is in Puri. The dance sculptures are clearly visible on the temple walls of Bhubaneshwar, Puri, and Konark.

The core of Sattriya Nritya has usually been mythological stories. This was an artistic way of presenting mythological teachings to the people in an accessible immediate, and enjoyable manner. Today, Sattriya is also performed on stage by men and women who are not members of the sattras, on themes not merely mythological.

Do read: The Union of India | The National Insignia

PrevThe Union of India
About Author