Important Rivers and Lakes of India 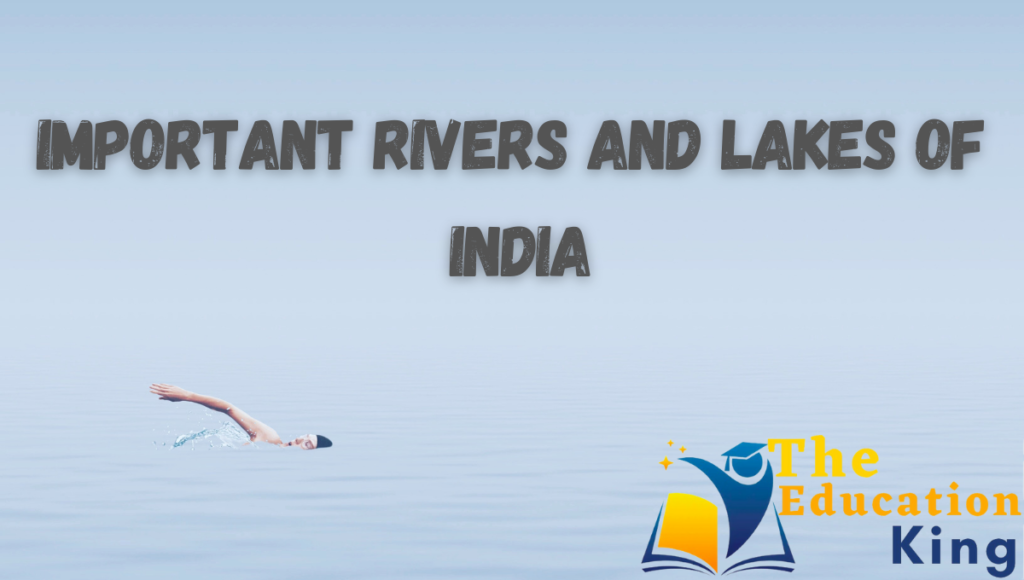 General Knowledge covers a huge section in any competitive exam and is also very scoring when studied thoroughly. Indian Geography is a very vast topic to study. This general knowledge series will take you through all important topics for competitive exams. Among several general awareness topics, the important rivers and lakes of India are very significant as well as very scoring too.

Rivers in India embark on a hugely important role in not only persisting the lifelines as they provide the most valuable thing required for survival- the water but also being worshipped as a sign of sacred belief. They are declared nature’s wonder and also a lifeline to several sections of society for ages as used for a variety of purposes such as drinking, agriculture, producing electricity, etc.

The Himalayan Rivers originate from the Himalayan mountain ranges. These are very long in range and cover the major areas on the surface with their larger basins. They receive water from glaciers and from rains. The bedrocks of these rivers are soft, sedimentary, and easily erodible. They form V-shaped valleys. They are perennial in nature, that is, flow throughout the year and maintain their original course despite changes in the rock topography. The major Himalayan Rivers are:

The Indus originates from the Tibetan Plateau near the Mansarovar Lake, flows through Ladakh, and empties into the Arabian Sea. It is 3180 km long and flows between Ladakh and Zaskar ranges in India, forming a gorge. Its major tributaries are the Balram river, Beas, Chenab, Dras, Gilgit, Jhelum, Ravi, and Satluj. India owns a five percent share of this river whereas else Pakistan has 93 percent and China has two percent.

The Ganga originates from the Gangotri(Himalaya) Glacier as the Bhagirathi and empties into the Bay of Bengal. It is the longest and the largest river inside India and the third-largest in the world is 2600 km long. It had also created the World’s largest Delta- Sundarban Delta in West Bengal. Its major tributaries are Gomti, Ghagra, Tamsa, Yamuna and Koshi. (It is also known as the Padma in Bangladesh. It is the Holiest river to Hindus as it is worshipped as Goddess Ganga and is named after Devprayag.

The Yamuna is the most important tributary of the Ganga, originates from the Yamunotri Glacier, and empties into the Ganga at Allahabad in Uttar Pradesh. It is the longest and second-largest tributary river of the Ganges. Its tributaries are Hanuman Ganga, Chambal and Sharda. It is the longest river in India that does not directly flow to the sea.

The Brahmaputra originates in the Chemayungdung Glacier in the Kailas Range entering from Arunachal Pradesh to Assam and empties into the Padma river of Bangladesh. It is 2900 km long. It is known as Jamuna in Bengali, Tsangpo in Tibet, and Pinyin in China. The Brahmaputra is also called as Tsangpo-Brahmaputra.

The peninsular rivers originate from the peninsular plateaus and small hills of India. They are comparatively smaller and shorter than the Himalayan Rivers, with smaller basins and catchment areas.  They receive water only by rain. The bedrocks of these rivers are hard and not easily erodible. They form U-shaped valleys. They are seasonal and hence don’t flow throughout the year. The major peninsular Rivers are:

The Mahanadi originates from the Sihava Parbat of the Raipur district of Chhattisgarh and forms a delta in the Bay of Bengal. It is 858 km long. It is the major river in Orissa and Chhattisgarh, which provides the major percentage of water for irrigation and drinking purposes. It is also known as The Ruin of Orrisa. Its tributaries are Hasdo, Mand, Jonk, Tel, and Sheonath.

The Godavari is the second largest river of India and the longest river of southern India, also known as “Dakshina Ganga”. It is 1465 km long. It originates from the Trimbak Plateau in Tryambakeshwar, Maharashtra, and forms a large delta along with Krishna in the Bay of Bengal. It is also known as the “Vriddha Ganga”. Gangapur Dam and Sriram Sagar Dam are two major dams on this river.

The Krishna originates from the Western Ghats near Mahabaleshwar in Maharashtra and merges into the Bay of Bengal. It is known as Krishnaveni and is the fourth largest in India with a length of 1400 km. Its tributaries are Koyna, Bhima, Musi, and Tungabhadra. Nagarjuna Sagar Dam, Narayanpur Dam, and Srisailam dam are some major dams of this river which are also major sources of irrigation for Maharashtra, Telangana, Karnataka, and Andhra Pradesh. Vijayawada is the largest city on this riverbank.

The Kaveri originates from Talakaveri in the Brahmagiri Range of the Western Ghats in Karnataka and merges into The Bay of Bengal. It is also known as the Cauveri and is 765 km long. Its important tributaries are Hemavati, Amravati, Noyli, Lakshantirtha, Kabani, and Sheesha. Hogenekkal and Sivasamudram falls are some famous falls of this river.

Lakes not only are a symbol of natural beauty but are of many uses for the inhabitants. They are a great source of drinking water, maintaining a livelihood, and contributing to irrigation. There are many lakes in almost every state of India.

Here is a list of some Important Lakes of India: