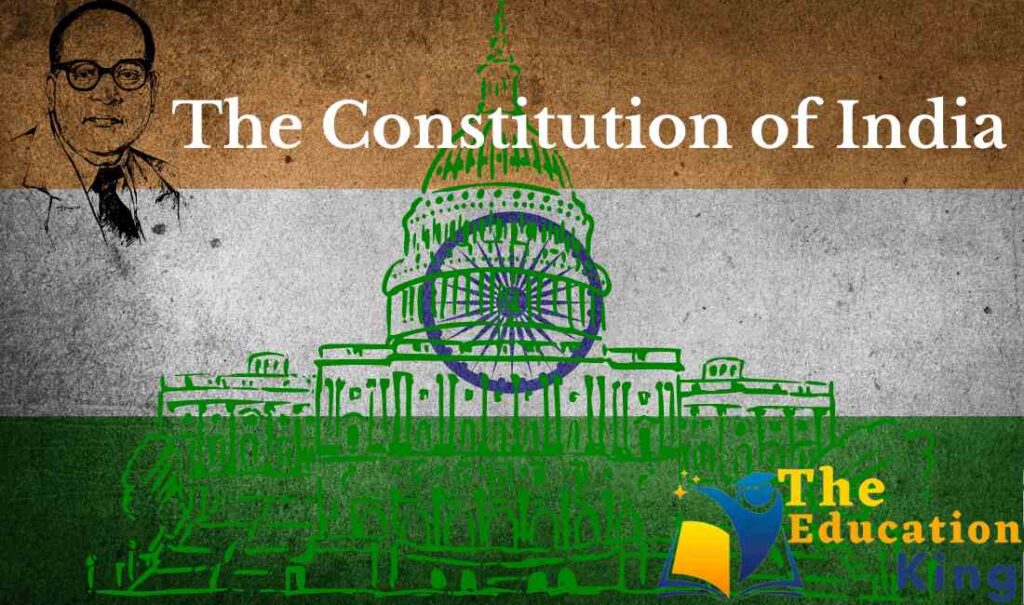 The Constitution of India | Indian Polity

The Constitution is a set of fundamental principles according to which a state is governed. It is a framework for the governance of a country that delegates power and authority to the executive, the legislative, and the judiciary. The objective of the Constitution is to develop and evolve a political culture based on certain rules and a healthy environment. It includes conferring powers, duties, rights, principles, obligations, and restrictions for the individuals as well as the state. It maintains harmonious relations between citizens and the state, and within different organs of the state. It also ensures to maintain the dignity of the nation, establishes unity, ensures citizen rights setting development agenda and orderly social change.

Making of the Constitution of India

The Constituent Assembly was formed in November 1946 under the Cabinet Action Plan. In 1934, M N Roy first proposed the idea of a constituent assembly, and the demand was taken up by the Congress Party in 1935 as an official demand. Members for the constituent assembly were selected through elections indirectly i.e, by the members of the provincial assemblies by the method of a single transferrable vote of proportional representation.

The total members of this assembly were 389, out of which 296 were indirectly from British India and 93 were nominated by princely states. The first meeting of the constituent assembly was held on 9 December 1946. The Muslim League boycotted the idea of the Constituent Assembly formation citing their demand for partition. It took 2 years, 11 months, and 18 days for the constitution to get finalized.

The formation of the constitution was based on Objective Resolution, under which, the people of India were guaranteed social, economic, and political justice, equality, and fundamental freedoms.

The resolution was adopted on 22 January 1947 unanimously, also enshrined the aspirations and values of the makers. The national anthem ‘Jana Gana Mana’ was adopted on 24 January 1950 and the National flag of the Union on 22 July 1947. The assembly had met for 11 sessions which made a final document of 22 parts, 395 articles, and 8 schedules. The citizens of the country were given a time of 8 months to give their feedback on the draft published in January 1948. The last session was held during 14-26 November 1949.

The Drafting Committee was established on 29 August 1947 by the Constituent Assembly. It consisted of 7 members, namely:

It took 141 days in all for the draft completion.

Enactment of the Constitution

The enactment was the process through which the Constitution was agreed upon and made official. The constitution was adopted on 26 November 1949 containing a Preamble, 395 articles, 22 parts, and 8 schedules. Now, it has 25 parts, 448 articles, and 12 schedules after going through 103 Amendments in the 70 years.

Enforcement of the Constitution

On 26 November 1949, the draft Constitution was passed and signed by the members and finally on 26 January 1950 it came into force and India became a republic. It was specifically chosen as the date of announcement of the constitution because on this day in 1930, the Poorna Swaraj day was celebrated as the resolution was passed in Lahore Session (1929) of INC.

Flexibility of the Constitution

The Constitution is flexible in many aspects :

Salient Features of the Constitution

Pillars of the Constitution

There are three pillars or organs of the government:

All three organs are interdependent to ensure the proper and systematic functioning of the government. The Constitution of India is a public document that is considered the voice of the people. Indian Constitution is the lengthiest and most detailed giving its people the rights and freedom.

The following are the articles in the constitution:

Schedules are the categories that facilitate governance and policies. At the time of adoption, the Constitution of India consisted of only 8 schedules, over the years 4 more are added.

Evolution of States and Union Territories

There are a total of 28 states and 8 union territories in India. Here are their reorganizations:

Do check out articles: The National Insignia | Largest, Highest, Longest of India | Superlatives of India

How many states and union territories are there in India?

There are a total of 28 states and 8 union territories in India.

PrevThe National Insignia
The Federal Structure of IndiaNext
About Author