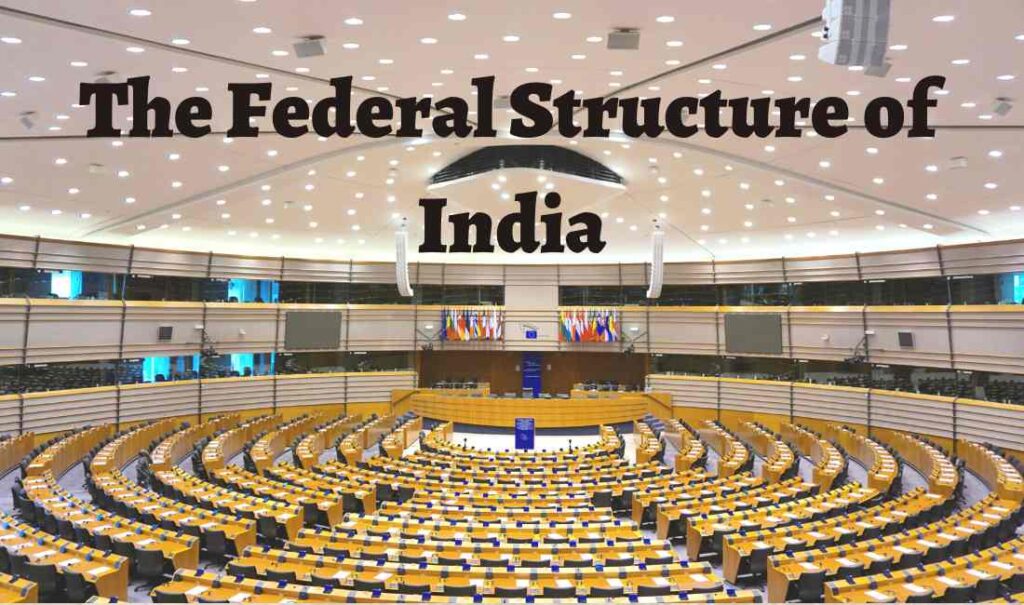 The federal structure of the Indian system of governance is a three-tiered system, each having executive functions with well-assigned powers. In a federal system, the central government and the governments of the units act within a well-defined sphere where they co-ordinate and act independently. In Indian federalism, according to the Constitution of India, the Central Government is the highest executive body of India. Under the Central Government are the State government, divisions, and sub-divisions.

Article I of the Constitution describes India as a ‘Union of States’, where it gives States to exercise powers and it implies that States have no freedom to separate themselves from the Union. It helps to maintain the unity of the country.

The Centre appoints the governors of the State and may take over the administration of the state on the recommendations of the Governor. The Union government also appoints important personnel of the nation such as the Chief Election Commissioner, the Comptroller, and the Auditor General. In India, we have a unified Judiciary with the Supreme Court being at the apex. All the state governments are dependent on the Center.

Part V includes Articles 52 to 78 which deals with the Union Executive. The Union executive consists of important officials such as the president, the Vice-President, the Prime Minister, the Council of Ministers, and the Attorney General of India.

The President is the first citizen of the Country being the head of the Indian State. Besides being the executive head of the State he is also the Supreme Commander of the Armed Forces.

Under Article 58, a person should fulfill the following qualifications, to be eligible for election as President.

The presidential term is of 5 years on the date he enters office.

The President is not directly elected by the citizens of the county but by members of an electoral college by taking into account the value of the vote of MLAs and MPs, by taking into consideration the following:

The Oath is administered by the Chief justice of India or the senior-most judge of the Supreme Court.

As mentioned in the oath, the prime duty of the president is to preserve, protect and defend the constitution and law of India.

The president exercises the following powers:

The Vice president is the second-highest constitutional official and is the deputy head to the Prime Minister of the republic. He is also an officer of the legislative branch of the Union Government as the chair of the Council of State.

Article 63 states that there shall be a Vice-President of the republic who occupies the second-highest office.

The President is elected by members of an electoral college by taking into account the value of the vote of MLAs and MPs, by taking into consideration the following:

Under Article 69, the oath is administered by the President.

The Prime Minister is the presiding member of the council of ministers of the Central government and is appointed by the President. He is the third-highest constitutional officer who is elected by the citizens of the country.

The Prime Minister communicates to the President all decisions of the Council of Ministers relating to the administration of affairs of the Union and proposals for legislation and information relating to them.

The Parliament is the Union Legislature. It consists of the President and two Houses- known as Rajya Sabha (Council of States) and Lok Sabha (House of the People). Each house has to meet within six months of its previous sitting. A joint sitting of two houses can be held in specific cases. Laws enacted by legislatures are usually known as primary legislature.

It has six major functions-

The Rajya Sabha is the upper house of the parliament constitutionally the Council of States. The Chairman is the Vice President of India. It consists of 238 representatives of the States and of the UTs, elected indirectly and 12 members nominated directly by the President, comprising a total of 250 members.

The Lok Sabha is the lower house of the parliament. It is composed of representatives of people chosen by direct election on the basis of adult universal suffrage. The maximum membership of the house allotted by the Constitution of India is 552 (530 MPs to represent the UTs). A total of 131 seats are reserved for representatives of Scheduled Castes and Scheduled Tribes.

The MPs are elected for 5 years. The presiding officers are the Speaker and Deputy Speaker.

Do read The National Insignia | The Constitution of India