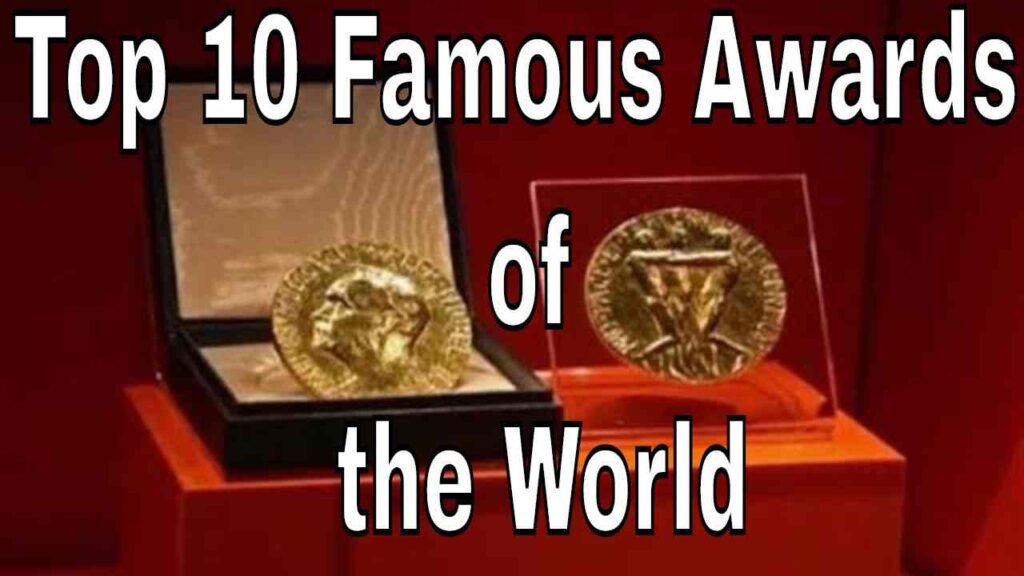 Top 10 most Prestigious Awards| Most Famous Awards in the world

Every achievement becomes more valuable when it is recognized and if an achievement is rewarded on a global level, we don’t think anything would be more elating than this… so know about the 10 most Prestigious Awards and their achievers. Well, achievers are honored with prizes giving them recognition with ranging backgrounds be it in sports, entertainment industry, charity work, science, writing, and many more…. Well, we are going to give you a glance at some prestigious and famous awards around the world.

The Nobel Prize is considered the most prestigious award given to any individual in utter excellence and contribution to their field of work. They are a series of awards given to the achievers in the field of Physics, Literature, Chemistry, Medicine, and Peace. They are awarded after taking into consideration the work done in the respective fields in the past year.

The prizes have been awarded since 1901 and in 1968 economics awards were also started in the same leg.

It is the legacy of Alfred Bernhard Noble, a Swedish chemist, inventor, engineer, and philanthropist, after whom the Nobel Prize is established. Born on 21 October 1833 in Stockholm, Sweden he took his last breath on 10 December 1896 in San Remo, Italy. Nobel after signing his last will in 1895, declared that he wanted his assets to be funded and be distributed as annual prizes.

Every year on Nobel day that is, 10 December marked as the death anniversary of Alfred Bernhard Noble, the award ceremony is held, however, the winners are announced in early October.

The very first Nobel Prize was honored to the Swiss Jean Henry Dunant and the Frenchman Frederic Passy in 1901.

A total of 12 Indians have received the Nobel Prize to date. Among which five are Indian residents and seven are of Indian ancestry.

The Booker Prize is the most prestigious literary award in the English-speaking world recognized for the best novel written in English and published in the UK. The winner receives international publicity which usually leads to a sales boost. The awards were first announced in 1969.

Percy Howard Newby, an English novelist, was the first winner of the title for his novel Something to Answer for, winning it in the inaugural ceremony itself.

Bernice Rubens, a Welsh novelist, became the first woman to win the Booker Prize in 1970, for her work in her novel The Elected Member.

Arundhati Roy, an Indian author is the first Indian to bring the title home for her work in The God of Small Things in 1997.

From a total of three Indian winners, two are Kiran Desai for The Inheritance of Loss in 2006 and Aravind Adiga for The White Tiger in 2008.

Damon Galgut, a South African novelist, is the latest winner of the title, for The Promise in 2021.

The Academy Awards or popularly known by the name The Oscars are honored for achieving merit in the artistic entertainment industry. They are presented by The Academy of Motion Picture Arts and Sciences, popularly known as AMPAS, every year. The AMPAS was founded in the year 1927, but the idea of presenting the awards of Merit in 12 categories was approved in May 1928.

Design of the Award

The trophy structure is a knight standing on a reel of film and holding a sword, made of gold-plated bronze on a black metal base. The statue is 13.5 inches tall and weighs 8.5 pounds. The award was originally sculpted by George Stanley, an American sculptor.

The BAFTA or British Academy Film Awards is an award show hosted to honor the best British and international contributions to the film and entertainment industry. The ceremony, every year takes place in the month of February.

The stated charitable purpose of BAFTA is to “support, develop and promote the art forms of the moving image, by identifying and rewarding excellence, inspiring practitioners, and benefiting the public”.

The upcoming 75th BAFTA Ceremony is scheduled to be held on 13th March 2022.

The Golden Palm or the Palme d’Or is the highest honored prize considered in the film industry. It was introduced in 1955 and is awarded at the Cannes Film Festival annually. This award was the replacement for the Grand Prix.

Cannes has its exclusivity and great history of premiering some of the greatest films of all time, also it has launched many careers of some bench-marking filmmakers and has given their career a boost.

The Pulitzer Prize is a series of awards given for excellent public service and achievements in literature, newspaper, magazine, online journalism, and musical composition awarded by Columbia University, New York City. The awards were established in 1917 and are given by a committee composed of the judges appointed by the University. The award ceremony is held annually for twenty-one categories. The winner gets prize money of US$15,000 cash and a certificate and the winner in the public service category gets rewarded with a gold medal.

The Golden Globe Awards are considered second in importance in the entertainment industry and are rewarded in recognition of outstanding achievements in television and motion pictures. The awards were established in January 1944. The awards are presented by the Hollywood Foreign Press Association (HFPA), an organization of 90 members comprising journalists and photographers reporting on the entertainment industry of the United States.

The Brit Awards are the annual popular music awards of the British Phonographic Industry. The awards were commenced in the year 1977 and broadcasted by Thames Television. They are believed to be the highest-profile music awards in the United Kingdom which featured many notable events with many high-profile faces.

The MTV Video Music Awards is an award ceremony presented to honor the best in the music video and pop culture on the MTV channel, also known as the “Super Bowl for Youth”. They were first awarded on 14th September 1984.

Which is the most prestigious award in the world?

The Nobel Prize is considered the most prestigious award given to any individual in utter excellence and contribution to their field of work. They are a series of awards given to the achievers in the field of Physics, Literature, Chemistry, Medicine, and Peace.

Who is the first person to win the Nobel Prize?

The very first Nobel Prize was honored to the Swiss Jean Henry Dunant and the Frenchman Frederic Passy in 1901.

Who is the first Indian to win the Nobel Prize?

Rabindranath Tagore was the first Indian as well as the first Asian to win the Nobel prize for his brilliant works in Literature in 1913.

Which country has won the maximum Nobel Prizes?

The United States has won the Nobel prize the maximum number of times around the world with 375 prizes.

Who is the recent Indian to win the Nobel Prize to date?

Abhijit Banerjee, born in Calcutta, India is the most recent Indian Nobel laureate to win the title in 2019 for his works in Economics.