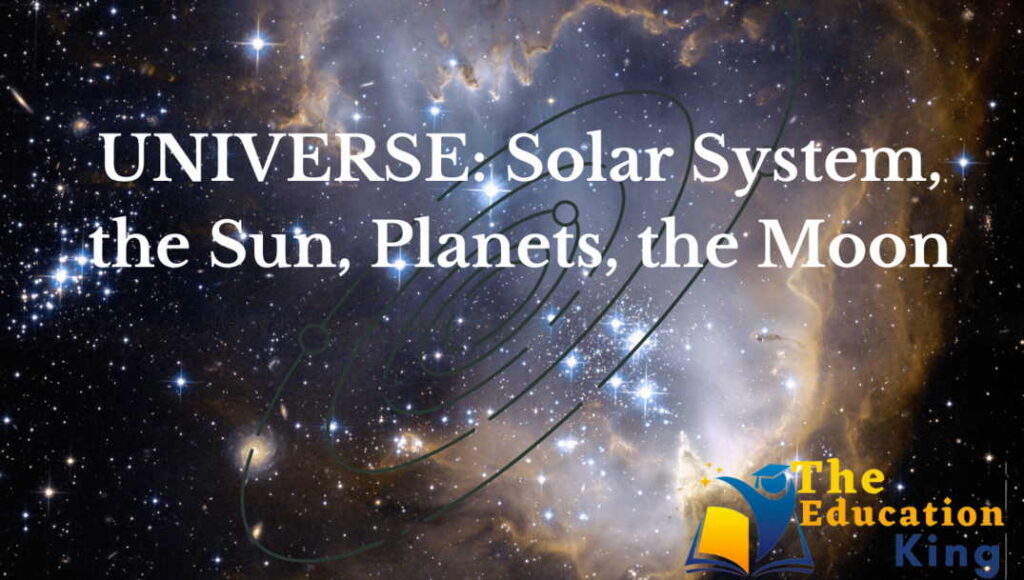 The Universe is defined as the totality of everything that exists, the planets, stars, galaxies, all physical matter, energy, and the contents of intergalactic space. The study of the universe is known as Cosmology. The universe comprises billions of galaxies, particles, cosmotic material, etc. It is believed that 4,600 million years ago stars and planets were formed from a giant cloud of gases and tiny dust particles known as nebula, a Latin word meaning dust and cloud.

The galaxies are made up of millions of stars held together by the force of gravity and these stars account for most of the masses of the galaxy. Our own galaxy is called the Milky Way (or the Akash Ganga) and it contains billions of stars among which the Sun is also the one. The Milky Way is named so because it is like a white band. Planets and other objects revolve around the Sun and make up the Solar System with the Sun at the center. Andromeda is our nearest galaxy.

Structurally, there are three forms in which galaxies are present:

An individual organization namely the Cosmic Background Explorer (COBE) and missions such as the Wilkinson Microwave Anisotropy Probe (WMAP) have been launched by NASA to study the radiations and transformations present in the universe.

Stars are heavenly bodies made up of hot burning gases which produce their own light. They are huge burning balls of hot gases which are self-luminous and shine in space. They twinkle because light from the star has to pass through different layers of the atmosphere with varying densities.

Neutron stars are formed by Supernova explosions, which are huge in size with approx 18 km diameter and a mass 1.4 times that of the Sun. A pulsar is one such highly magnetized and rotating neutron star. The nearest star to the sun is the Proxima Centauri, which takes four years for its light to reach us.

Constellation is a stars group or pattern collectively forming fantastic patterns or designs of creatures, brave heroes, heroines, monsters, etc. Many have legendary backstories mostly of courage, beauty, etc. Some of the most popular constellations are the Big Bear or Ursa Major, Small Bear or Saptarishi are very easily recognizable in the sky. Saptarishi as its name is a group of seven stars. The Pole Star or North star always stays in the same position and helps in determining the north direction.

The black holes are formed due to collapse and compaction under gravity, at the end of the life cycle of a star.

Some of the units used for the calculation of distances in-universe are as follows:

The solar system is a family comprising of the Sun, 8 planets, their satellites, and other non-stellar objects, which are believed to have been developed from the condensation of gases and other lesser bodies. The word ‘Solar’ is derived from the Latin word ‘Solaris’ which means sun.

The end of the Solar System is about 122 AU (Astronomical units) away from the Sun.

Components of the Solar System

Our Solar System consists of

Origin of the Solar System

Various theories were given to explain the Origin of the Solar System.

The Sun being the center of the Solar System is the major source of energy, provided by the nuclear fusion reaction, that converts hydrogen into helium in the core of the Sun. Hence, the Sun is majorly comprised of hydrogen and helium.

It accounts for more than 99 percent of the mass of the Solar System and due to this, the Sun exerts an immense gravitational pull on the planets to keep them rotating around its indefinite elliptical orbit. This pull keeps all the planets and satellites revolving around it.

The glowing surface of the Sun that we see is called Photosphere. Above the photosphere is the red-colored Chromosphere and beyond it is the magnificent corona, which is most easily visible during eclipses.

The Sun has a surface temperature of about 6000°C and the interior is at 20 million degrees Celcius.

It takes 224 million years to complete one circle (revolution) around the center of the Milky Way. This is known as a Cosmic year. It takes approximately eight minutes for the sunlight to reach the earth’s surface.

Superimposed on Sun’s white light are hundred of dark lines called Fraunhofer lines. Each line indicates some elements existing as gases in the Solar System.

Concept Associated with the Sun

Planets are celestial bodies, which continuously revolve around and are lighted by a star. They have sufficient mass and self-gravity to overcome rigid body forces such that they assume a hydrostatic equilibrium shape. There are eight planets in the solar system that revolve around the Sun in an elliptical order, listed according to their distance from the Sun as Mercury, Venus, Earth, Mars, Jupiter, Saturn, Uranus, and Neptune.

The sequence of planets according to their size (in descending order) is Jupiter, Saturn, Uranus, Neptune, Earth, Venus, Mars, and Mercury.

A dwarf planet is a celestial body that is in orbit around the sun, has sufficient mass for its self-gravity to overcome rigid body forces so that it assumes a hydrostatic equilibrium shape, and has not cleared the neighborhood around its orbit.

Pluto lost the coveted honor of being a planet and is demoted to being a dwarf planet. It was discovered by Clyde Tombaugh in 1930. It has sufficient mass so that it assumes a hydrostatic equilibrium (nearly round) shape.

The moon is the only Earth’s natural satellite. The study of the Moon is called Selenology. It is also known as a fossil planet. It has no atmosphere and no twilight.

Specifics of the Moon

Asteroids are bits and pieces composed of rocks, dust, and metal, left behind when our solar system was made. They have no definite shape and size and are also called planetoids or minor/small planets. They orbit around the Sun in the asteroid belt, which lies between the orbits of Mars and Jupiter. This belt stretches from about 250 million to 600 million km from the sun.

Meteoroids are small fragments of rocks and metal smaller than comets. They are tiny lumps of burning matter and streak through the solar system. Those meteors that enter the earth’s atmosphere are called meteors and those that crash upon the earth are called meteorites. Under the Earth’s gravitational field, they burn and become white-hot through friction as they fall through the atmosphere and are seen as Meteors or Shooting stars. They don’t have any definite shape and they travel through space. Meteors are scattered in the interplanetary space of the solar system.

Comets are icy, rocky masses that have a solid nucleus surrounded by a cloud of glowing gases called the coma. It may originate in a huge cloud called the Oort cloud that surrounds the solar system. They have glowing tails pointing away from the sun because of the solar wind and the radiation pressure. They have an extremely eccentric orbit but with definite periodicity.

Who was the second man to land on the moon?

Edwin Aldrin was the second man after Neil Armstrong to land on the moon.

To which galaxy does the solar system belong?

Our solar system belongs to the Akash Ganga or the Milky Way.

What is a light-year?

The distance that light travels in a year is called a light-year.

Sun Spots are areas of the sun that are slightly less hot. They appear as barrier spots on the otherwise shining sun which are not stationary.

What are Small Solar System Bodies?

All the objects orbiting the Sun shall be referred to collectively as ‘Small Solar System Bodies’.

In which direction do planets move?

Planets move around the sun in an anti-clockwise direction, i.e, west to east.

How long does Mercury take to complete one revolution?

Which is India’s satellite launch base?

Sriharikota Island has been developed by India as a launch base with the most modern launch infrastructure for satellite launching.