8 Reasons To Why everyone is learning python Programming 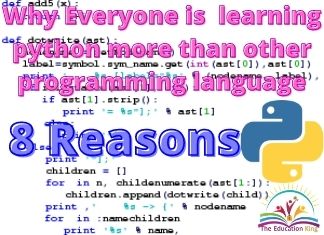 According to the Codecademy, 2018 saw a 34% increase in users studying python. We can learn Python programming from many popular online leaniring platform like Udemy, Coursera , Codecademy, Freecodecamp and also most popular platform You Tube.

Python is new language that was created in 1990 by Guido van Rossum at Stichting Mathematisch Centrum (CWI) in the Netherlands as a successor of a language called ABC.

When Guido began implementing python, Guido was reading the published scripts from “Monty Python’s Flying Circus” a BBC comedy series from 1970s. So that Guido decided to call this language as a Python because he wanted to give short, unique name.

Python programming can be treated in a procedural way, an object-oriented way or a functional way. Python is interpreted and high-level programming language with dynamic semantics. Python supports modules, packages, which encourages program modularity and code.

Python is written in English. But there are several implementations: PyPy (written in Python) and CPython (written in C ).

In present time most of the companies appoint that person who knows python and lots of student learning python on their personal interest or for professional reason.

These are the main reason behind the popularity of python:

This data proved the popularity of python programming.

If we want to do programming in any language we have to use some IDEs (Integrated Development Environment in developer speak) for it.  IDEs are software programs that combine tools for writing and testing software, mobile apps or any websites into a platform.

Nowadays Python is using in many sectors and also many companies.

These are the main sector where we are using python:

Yogesh Ashiwal
My name is Yogesh Ashiwal. I live in a village Reengus, Sikar. I am 19 years old I am doing a degree course in Bachelor of Computer Applications(BCA).